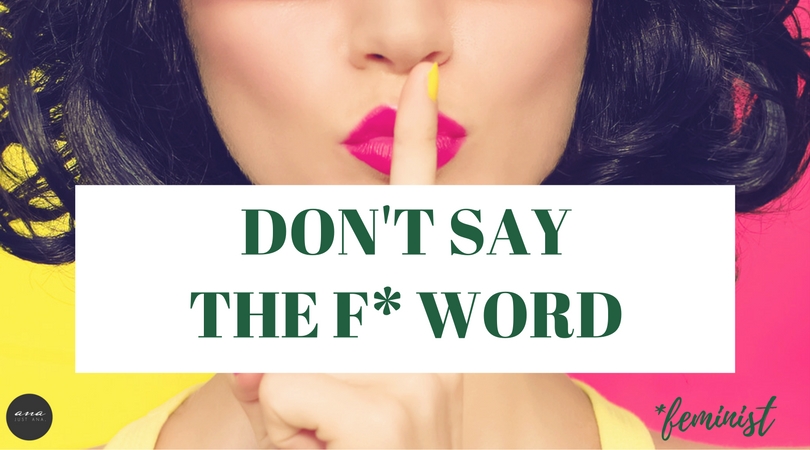 Some months ago, I was visiting a friend. Our sons are of the same age, they play very well together and this gives us a chance to chat a bit (like 5 min in a row without being interrupted).

She was looking for a job. Her second son had started child care a couple of weeks earlier and she finally had time to start searching for a job after a break of more than three years. At one point her husband emerged from his home office and joined us for a coffee. I was providing her with some advice on how to rebuild her professional network, sharing interesting contacts and so on. Her husband then looked at me and said: “Ah! You are a member of this feminist club right? ”

For a moment, my time stopped. The way and the tone of how he said the word Feminist was such a mix of joke and arrogant amusement, I was taken aback. He obviously did not like the “feminist” type of person and suddenly I asked myself what he actually thought of me.  Since I did not want to start an intense and tough conversation with him in front of his wife and our children, I let it go. I smiled and said that yes, I was part of a professional women’s club and I was providing his wife with some valid insights on how to find a job after a family break. There was certainly tension in the air but we both dropped the ball and kept chatting about superficial stuff.

I had a similar experience with a former colleague of mine. He was telling me that his wife had not been working since they had the kids. Now that both kids were in primary school, she was trying to find a job. I was trying to better understand her background, in case I could maybe help in a way, when he suddenly says: “You know, she is a bit of a feminist. But its ok, it doesn’t bother me so much” and he laughed. (I´m fairly sure he had no clue what I do in my spare time). The way he said “a bit of a feminist” was like it´s some sort of sin, like saying “she has a bit of a gambling addiction, but it´s not that bad.”

I could tell you of some other examples of men using the word feminism like it is a bad disease or a kind of social terrorism one would rather not be associated with (quote from Chimamanda Ngozi).

Here is the question: what’s wrong with the word feminist? Why do some people (men AND women) today react so negatively to the concept of feminism?

As far as I´m concerned I think it´s a great thing to be and if you browse the web only good things have been done in name of feminism. At the end of the day, feminism claims gender equality. This means that feminists (women and men) want women to have the same political, social and economic rights as men. Since we are no longer in an era where we have to fight for the minimal social rights like voting, access to birth control and the ability to get a divorce (at least not here in Switzerland), maybe there is a disconnect as to why we still need to be fighting for equal rights? But the point is that we do! Here are just a few more examples why: women with the same degree and experience are still underpaid compared to a man for the same job*; there are fewer than 15% of women on company boards**; access to capital for women entrepreneurs is harder to come by than for men***.

Are they not very valid topics to support? So why be so negative on the concept of feminism?

Maybe it brings too many negative historical connotations like women disliking men, burning bras and other nonsense stuff. Sheryl Sandberg tried to create a new and modern brand name, but at the end Lean In*° is getting the same slightly negative connotation that I know so well.

For me feminism is about having the same right to choose as men do, being recognized in the same way and not being judged by different parameters.

This simply means: decide to have a job paid and recognized like my male colleagues, while having children and invest my free time in a women´s organization without being judged as an overly ambitious woman, bad mom and feminist (with the negative connotation). If I were a man, there would be not judgement at all, it would be completely normal. Same way for men. It would be great if men could decide freely to take paternity leave and/or decrease their working time to spend more time with their family, show some emotions in public and be happy to not try to be a powerful and rich alpha male all the time.

The great thing about feminism is that gender equality works both ways.

On the 24th of October 1975, more than 90% of all the women living in Iceland went on a strike for equal rights (they called it a “Day off” to make it sound less rude). For one day women just stopped doing their duties as employees, wives and mums to demonstrate how important their contribution to society was; that’s why they deserved proper and equal recognition. Iceland was frozen for a day: no child care, no paper news, no flights, most banks closed …men had to take their kids to work or stay at home, they struggled to cope with that situation. It took one year to have a law passed guaranteeing equal rights for women and men. This Women Day off not only allowed Iceland to be the first democracy to elect a female president, but also to be the country with the narrowest gender pay gap in the world for the 6th year in a row*°°.

And all this has been achieved thanks to women who wanted to be treated and recognized in an equal way as men. Probably most of them did not even defined themselves feminist. But it does not matter how you label yourself, what matter is what you believe in. And we all believe in gender equality, right?

And now tell me: how can you not be a feminist?

for global data, a very good article on the Guardian  https://www.theguardian.com/us-news/datablog/2017/apr/04/equal-pay-day-us-wage-gap-gender-race-ethnicity

This site uses Akismet to reduce spam. Learn how your comment data is processed.

This website uses cookies to improve your experience while you navigate through the website. Out of these, the cookies that are categorized as necessary are stored on your browser as they are essential for the working of basic functionalities of the website. We also use third-party cookies that help us analyze and understand how you use this website. These cookies will be stored in your browser only with your consent. You also have the option to opt-out of these cookies. But opting out of some of these cookies may affect your browsing experience.
Necessary Always Enabled
Necessary cookies are absolutely essential for the website to function properly. This category only includes cookies that ensures basic functionalities and security features of the website. These cookies do not store any personal information.
Non-necessary
Any cookies that may not be particularly necessary for the website to function and is used specifically to collect user personal data via analytics, ads, other embedded contents are termed as non-necessary cookies. It is mandatory to procure user consent prior to running these cookies on your website.
SAVE & ACCEPT